What is your favorite part of  Blackmoor of The First Fantasy Campaign? For me it has to be the bad guys that Arneson came up with. Let's take a look.

First here is part of how Arneson introduces these bad guys


The intention of this secret list (which supercedes list No.4, which was burned before being sent out, to avoid panic) is to supply Judges operating in the Blackmoor area with guidelines for setting up these horrible characters. It will also save you all the trouble of saying you made them up yourselves, now you can blame me when the Level Fourteen Lord is  killed and he is unhappy about it.

First up is the Egg of Coot


This all consuming personality lives off the egos of others to support his own ego. At one time (millenia ago) of humanoid characteristics, today, his exact physical description is unknown.

He then speculates if the Egg of Coot still has a physical appearance and if so what it might be and that it is probably too horrible for a mortal to behold. Notes that surrogates carry out orders and the communication is direct mental contact or through voice transmission. The throne room contains a


I fear the rest of the Creed is a bit too strong for our gentile(sic) readers ...

Next is Ran of Ah Fooh. This bad guy is stated to be as much a self-centered egotist as the Egg of Coot whose mania takes up a logical approach to all things and then treats those beliefs as a series of unalterable facts.
He is known to be of human appearance, is 7 foot 3 inches tall, Warrior skills of 10th level and does not suffer from fatigue. His magic is 10th level, but never uses less than a Level III spell because Level I and II spells are beneath him.

Among other things he is known for Dragon Breeding. He has a vast breeding area in the environs of Mount Rockey. Also mentioned are an Android (Zombie?)Army and Robots by the carload. As with the Egg of Coot there is a lot more to the description.

Then we have Gin of Salik who is one of the greatest Wizards in the world with the most powerful spells and of striking physical appearance.

Marfeldt the Barbarian with a brief description followed by A Short Biography.

Then the Duke of the Peaks a former ally of Ran of An Fooh.

He also details some of the good guys although this next one seems to be more of an anti-hero.

The Blue Rider a mighty Warrior who had a Sword of Blue Flame and rode a mighty Warhorse. His name was William of the Heath and his horse "Bill" and both were infamous. It is also said that he took up the challenge of being a good guy, although he retained his sleasy nature.

Mellow and the Hobbits. Mello being a lifelong sidekick of the Blue Rider.

The Great Svenny whom most have heard of who is a Paladin, the mightiest of Heroes.

The Bishop of the Church of the Facts of Life, the Doctrines of Whatever and the Interpreter of the Great Commentaries of Wishy-Washiness.

Chief of the Nomads, little is known but his military prowess is fearsome beyond belief.
Posted by Raven Trueheart at 11:39 AM No comments:

It has to be quick today, as today is very busy, so I am going to provide a link to an interview with an original Blackmoor player Greg Svenson.  This interview is from 2009 over on the blog Sham's Grog & Blog a fine blog by the way, you should read it.


Q & A with Greg Svenson

Part of the intro


With Dave Arneson's recent passing, our hobby lost one of the most important links to its earliest, formative days. Arneson & Gygax will be forever remembered as the coauthors and founders of Dungeons & Dragons, but there is so much more to Mr. Arneson that we were never truly allowed to learn while growing up in the 70s, 80s and beyond while playing the game that his Blackmoor campaign spawned. I've read with wonder the stories that Greg “Svenny” Svenson shared with readers at his website before it was taken down*. As a player in the original Blackmoor campaign, Greg is one of only a handful of gamers who were present to witness the fledgling game sessions which eventually gave rise to the entire table top role-playing genre (and beyond).

Here is a snippet of a long interview post


Sham: You were playing in Blackmoor before D&D was published, and again afterwards. What impact did the release of that version of the rules have upon Dave’s personal campaign?

Greg: As soon as a draft was available we started play testing with them, but I don’t think it really changed how the game went when Dave was the DM. That’s just my opinion. The big difference was that others (like me) were more easily able to DM. All of the sessions I DMed were part of the same Blackmoor campaign that Dave was running. Often I was helping players get to a higher level so they could survive with the other higher level players.

Sham: What was Dave’s early opinion of TSR’s 1974 D&D game? For that matter, what was the general opinion of you and the other players in Blackmoor when you finally saw the original D&D game?

Greg: Dave was excited about it, but I am not sure what he actually thought about it, I don’t remember him ever talking to me about it in that way. I thought it was one and the same thing with what we had already been doing for several years. So, I didn’t really see much of a difference.

Posted by Raven Trueheart at 11:16 AM No comments:

So I want to throw out a challenge to all of you to post about your game (if any) this weekend on the 1st (unless of course your game is on the first). Several of us are going to be doing a blog search to see how many posts we can find and we'll collect those over on the forum and then it will be easy to copy paste that to our blogs for a comprehensive link to those posts.

A point that I think needs to be made in reference to these celebrations is that we are not Pro-Arneson and Anti-Gygax. We believe that those who worship St Arneson and St Gygax are a pack of idiots. Neither man was a saint. But both men had a profound influence on our hobby. What we are is Pro-Proper Credit being given to each.  The credit each deserves for what each did and not for what each did not do.
Posted by Raven Trueheart at 10:50 AM No comments:

Many people celebrate by gaming in Blackmoor, many even have Blackmoor as part of their own campaign and a similar thing happens with Greyhawk and Gygax. I don't do that myself, as I think that the spirit of the day is to do your own thing.

So this weekend, I and my friends will be gaming in my campaign world that I call The Blue Fire Diamond Campaign. I called it that because anything other than low level magic requires a focus gem and the highest potency magic is made with a Blue Fire Diamond as the focus gem. These are rare and hard to find and hard to obtain and hard to make it back to civilization with one.

We have a long running campaign with an average of eight players on game nights. Counting myself, we have three players from the early days of the campaign still around and playing. A mixed group of men and women, black and white, college and non-college. The only requirements are be a decent human being and have an imagination.

The campaign features unique creatures, magic, magic items and other stuff. Maybe as time goes by I will share some of those items here on the blog.

Please share with us what you are up to, we'd love to hear how you are celebrating.

Posted by Raven Trueheart at 2:00 AM 2 comments:

Who is Dave Arneson and what is Blackmoor? While I'll have more to say about Supplement II at a later date, in the introduction to Blackmoor Supplement II Gary Gygax has this to say


Dave Arneson . . . Is there really such a creature? Yes, Gentle Readers, there is, and shudder when the name is spoken. Although he is a man of many talents who has authored many historic rules sets and games (which TSR will be publishing periodically), Dave is also the innovator of the “dungeon adventure” concept, creator of ghastly monsters, and inscrutable dungeonmaster par excellence. He devises complex combat systems, inexplicable dungeon and wilderness areas, and traps of the most subtle fiendishness. Herein you will get a taste of these, but he never reveals all. This writer always looks forward with great anticipation to an adventure in the “BLACKMOOR” campaign, for despite the fact that I co-authored the original work with Dave, and have spent hundreds of hours creating and playing DUNGEONS & DRAGONS, it is always a fresh challenge to enter his “world.” I can not recommend him more highly than simply saying that I would rather play in his campaign than any other — that other dungeonmasters who emulate Dave Arneson will indeed improve their games. While eagerly anticipating yet more material from dread “Blackmoor Castle,” the following pages should satisfy your immediate craving for new ideas. Those of you totally committed to the fantasy adventure game may expect additional supplements from time to time, and isn’t that dark shape crouched over the desk of blackened oak, laughing fiendishly as glowing runes flow from his quill, remarkably similar to Arneson’s?

Posted by Raven Trueheart at 1:00 AM No comments:

So if you play an rpg, any rpg, then play a game this week in his honor. Some people play in their version of Blackmoor, some play an adventure module they have handy and some play in their own home brew game. I'm sure Dave Arneson would approve of all of these because above all he just wanted people to have fun and play games.

Blackmoor, the original most fun to be place.
Posted by Raven Trueheart at 2:00 AM 2 comments: 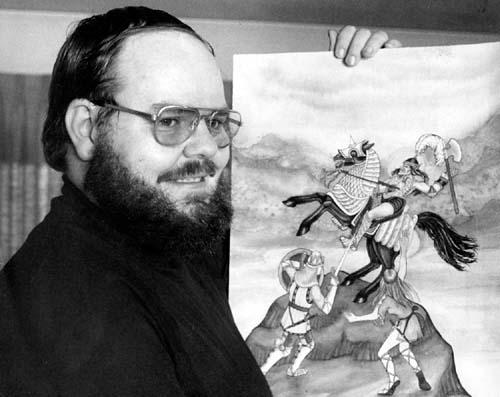 This week September 24th through the 30th is Blackmoor Week and it culminates on October 1st which is Dave Arneson Game Day. Many of us will be gaming over the weekend to celebrate. Join us in remembering Dave Arneson the creator of table top role-playing, the world of Blackmoor and Dungeons & Dragons.
Posted by Raven Trueheart at 8:30 PM No comments:

Translate This Page to the Language of Your Choice

Subscribe To Here Lurks the True Heart of the Black Raven